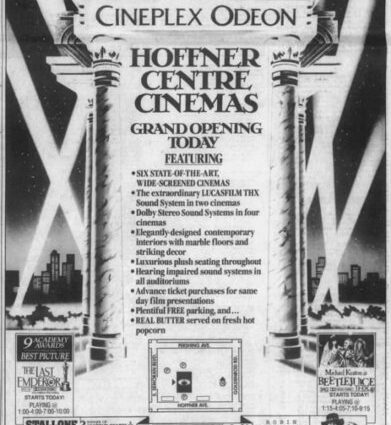 Monday Memories: Growing up with Movie Theaters in Orlando

With Avengers: Endgame packing movie theaters over the weekend (my review HERE) and the push to keep our shopping malls alive (story HERE), I thought for our Monday memories post, I would reflect on a history of growing up with movie theaters in Orlando.

Independent 2 screen movie theater on Curry Ford rd: Ok, I’m stretching way back for this one. There was a two screen movie theater on Curry Ford on the last stretch of road, before you hit the Delaney park residential area near downtown. I was taken to see “Big Business” and “Millennium” there in 88′ and a couple of other films I don’t remember. I look at the structure now and wonder how it ever hosted a theater, I believe there is a Family Dollar and a small restaurant there now.

The Hoffner Movie complex near the airport: This was a fine theater down on Semoran and Hoffner that I believe was open up until a couple of years back (clipping HERE). I saw Days of Thunder (a great racing film to this day), Back to the Future II, and Another 48 Hours. I believe a private college or school is there now, and I’ve actually covered a lot of political rallies in that shopping center as well.

The AMC theater on Colonial near the Navy operation: The building is still up and is currently a Megachurch. This is actually the theater all of the Navy personnel would visit back when they were still here. I saw the third Indiana Jones film, Joe Versus the Volcano, Teenage Mutant Ninja Turtles and a few others here. I recall it being very nice.

The Colonial Promenade 6: This one was across the street from the last theater. I saw the first Batman film there and it was actually open as a one dollar theater up until a couple of years back. It’s still there, maybe someone can revive it. The entire shopping center next to the executive airport needs a lot of work.

The AMC Altamonte 2: They tore down this two screen gem to make space for where that 18 screen theater that sits there now. I saw Pulp Fiction, Robocop 3, and a couple of other films there. What was funny was that just up the hill less than 100 yards away from this theater was the….

Altamonte Renaissance 8: This was my regular theater for years. Forrest Gump, Braveheart, Interview with a Vampire, Independence Day and others played here. This was also behind the fast food restaurant I used to work at and had a pretty good selection of video game cabinets such as Aliens vs. Predator, X-Men vs. Streetfighter, and a Capcom Machine with a few good titles. The theater was torn down to where another shop currently sits in that very busy shopping plaza in front of the Lofts community at Cranes Roost.

Apopka Riverwalk: This eight screen theater is actually still in business in an underserved Apopka movie market. I saw Speed, the Crow, and Heat, there back in the day, and more recently American Gangster, and the first Thor film.

AMC West Oaks 14: Still open, and the first theater in the area to feature Stadium Seating, this place was always full back in the late 90s and early 2000s. I mentioned how sad it looks now in an empty West Oaks Mall, but let’s hope for a revival. I saw Armageddon, American Psycho, and Crouching Tiger, Hidden Dragon there.

The Altamonte Picture Show or Interstate 6 theaters: I’m ending this list with a theater that has actually gone the distance with me here in Orlando. I saw Lethal Weapon 3 (which featured the demolition of the old Orlando City Hall), Nutty Professor, Jerry Maguire, and Dumb and Dumber there back in the 90s. It’s a one dollar theater now, that I still enjoy visiting. Most recently, I saw the Glass and the second Creed film there. It’s in bad shape now and there are times when just for the purpose of sheer preservation I feel like picking up a scrub brush or paint roller to fix the place, but it’s good to see it there each time I drive down I4. 2019-04-29
Previous Post: Corrine drive proposal a step in the right direction for pedestrian safety in Orlando
Next Post: Florida tourism industry should be concerned about efforts to make flying even more uncomfortable