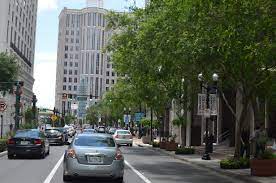 State Senator Randolph Bracy was able to secure scholarships for descendants of the Ocoee Massacre, $305,000 for 50 students (story HERE).

As he ramps up his campaign to try and succeed Val Demings in Florida’s 10th Congressional district, this accomplishment will only make the issue of reparations bigger among Orlando voters.

In fact, behind community policing reform, it wouldn’t be a stretch to say that each of the candidates should have a plan for introducing significant reparations legislation if elected. Expect Bracy’s rivals, former Orange-Osceola State Attorney, Aramis Ayala, and Civil Rights Attorney, Natalie Jackson, to have their own plans.

And it’s not about buzzy campaign issues either, there are a lot of residents struggling in the 10th district right now. The Val Demings administration has been more focused on Donald Trump instead of comprehensive policy. That’s not a jab. Affordable housing and low wages are still problems in 10th district Orlando, just like they were when she took office in 2017.

Reparations won’t be viewed as only reparations, but as another life line to keep the lights on in their apartments for potential voters.

And if you’re worried about opposition to reparations in this race for congress, there won’t be any. Conservative opposition won’t be an issue as the district is drawn today, and likely won’t be after redistricting.

Now when the winner actually gets to congress? Well, getting a bill passed might be a different story.

But for right now, I think we’ve uncovered a significant issue in this contest.

And let’s not overlook the fact that 50 kids are going to get some extra help for school. That is a win for the community.

2021-06-04
Previous Post: Spring football would still be doomed to fail under Orlando Renegades revival
Next Post: The Positives and Negatives from the 2021 Orange County State Of The County Address