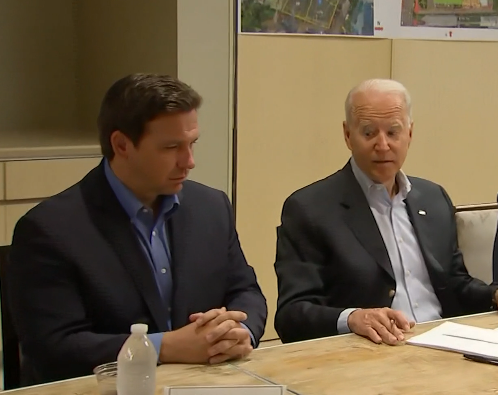 Despite possible collision course, unity between Joe Biden and Ron DeSantis at Surfside was good for Florida

It wasn’t a guarantee that President Joe Biden and Florida Governor Ron DeSantis would meet during the former’s visit to Surfside on Thursday, to examine the building collapse that has taken the lives of over a dozen people with over 150 still missing.

But the two did meet, and actually did a press availability together, where they praised each other’s approach to this terrible disaster.

It was called a “rare” moment, which is unfortunate, but still a reason to stand on hope, between everyone that cares about Surfside and the state of Florida.

This blog stated that unity between the two was essential (story HERE) and to see that come together is a good sign.

There will be hard liners and borderline sociopaths that will go on social media and shout at both leaders for participating in this kind of civilized behavior.

And Ron DeSantis might actually get checked for this in a couple of years by some desperate primary rival. Even though it’s possible they’ll both be competing for the chance to run against Joe Biden. That is political irony. Let’s hope our memories are strong enough to push that toxic message away.

But there is also that possibility. Isn’t there?

Joe Biden and Ron DeSantis might very well be running against each other in 2024, depending on what Donald Trump does. Such is the nature of politics.

But future elections should never get in the way of civility and helping people in the present. People forget that so often these days.

And this isn’t the first time for DeSantis. He met with another political opposite, Orange County Mayor Jerry Demings last year during the pandemic to talk about small businesses.

Let’s hope we see this trend continue. It’s the way it used to be. And there was never really a reason why it ever should have changed.