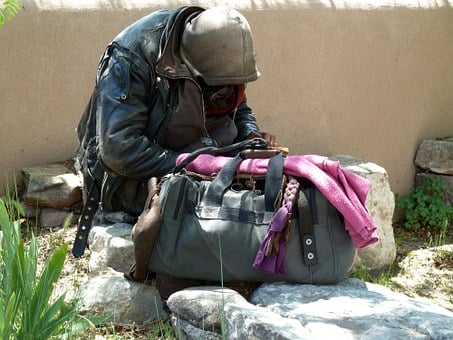 One of the saddest parts of homelessness both from someone who’s background allowed him to learn about it and from someone whose currently experiencing it, is the mental effects on the men and women that suffer from it.

When you have nothing, it’s so easy to forget anything that is good in your life. You feel alone all of the time.

It’s even easier to forget that you’re capable of doing good things. I know it’s been that way for me. There are times during the day when I forget everything positive and I don’t want to do anything. It’s crippling.

And even worse are the setbacks. When there are events that actually hurt your confidence.

When I got to the town I’m in now, I was dragging around two bags and one of them had a bunch of dirty laundry in it. It’s the middle of the summer, I’m sweating and I stink. I was walking past a business man who was wearing this sharp blazer.

When I went to complement him, he flinched. He thought I was going to ask him for money.

It took me a second to realize it. I was a mess.

The next day I went to a job interview I was able to get online (my resume is still pretty strong). When I walked into the place, the two workers up front asked what I wanted. When I told them I was there for an interview, they hesitated to let me sit.

The effects of these experiences were devastating for me. This happened to me before in Orlando when I lost my car but this time it was real. They were right. I wanted to just go and sit down in the park and shut down like so many other people in this community do. Many of them are veterans.

Each morning I have to sit down and talk myself up. It’s like jumping starting a car. It’s almost impossible to wake up in the morning with nothing and get strong.

It’s been one of the most powerful experiences of this nightmare so far.

2021-08-04
Previous Post: One of the worst weeks of my life
Next Post: Living a life without your keys