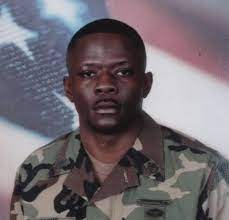 Sergeant First Class Alwyn Cashe from Oviedo is being awarded the Medal of Honor by President Joe Biden today. And it’s a moment that will make our entire Central Florida community proud.

Cashe rescued his platoon members from a burning vehicle while his own uniform was on fire after his vehicle was hit by an improvised explosive device in Iraq. He refused to leave anyone behind and asked about his fellow soldiers until his passing (story HERE).

It was an honor to say I wore the same uniform as this man. You can train for these types of disasters, but actions like those of Alwyn Cashe that save the lives of others, are stories we’ll tell for generations to come.

We also have to recognize the work of Representative Stephanie Murphy to get this honor awarded. Without an advocate like her this doesn’t get done. There are many other heroes whose actions aren’t recognized because no one pushes through the red tape.

God bless the family of Alwyn Cashe. And god bless all of those serving in the armed forces from Central Florida.

2021-12-16
Previous Post: AEW: Hangman vs. Danielson delivered as expected, but TNT hurts the flow
Next Post: Spiderman No Way Home: SPOILERS! Who’s in it? What happens? After credits