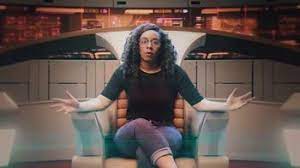 If you’ve been scrolling on Twitter, it’s quite likely you’ve seen those great commercials featuring the Star Trek cast which has included everyone from Jonathan Frakes, Levar Burton, and Brent Spiner to Karl Urban and Sonequa Martin-Green.

But fans don’t know who this is. There have been guesses but there hasn’t been a consensus. The account calls her BorgGurl. Could be she’s just an everyday player of the game?

Hey BorgGurl, put some respect on @StarTrek #TheNextGeneration’s @BrentSpiner and @jonathansfrakes! Epic battles and the greatest teams await you if you’re bold enough to go where no one has gone before. 🖖

There have been some guesses but it doesn’t seem to be listed anywhere. They didn’t even link her social media account to the ads.

This is good for the game and the talent. There is interest here which means it’s already more successful than 9 out of 10 other ads on social media.

2021-12-17
Previous Post: LYNX should be free if Orange County passes transportation tax
Next Post: Florida is indeed in a housing state of emergency, especially here in Orlando