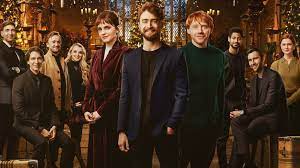 Harry Potter 20th Anniversary Return to Hogwarts: Is JK Rowling in it? And the five best parts

Yes, JK Rowling is briefly featured: The architect of this universe JK Rowling is featured only in a few remarks that were quick cuts from an interview, with one of the notes stating that they were shot in 2019. Rowling has been a controversial figure on social issues in recent years

Regardless of your position on Rowling, the special is a complete victory for fans of the franchise.

This includes myself, who read these books and saw these movies as he traveled around the world. I remember the premise being described to me and laughing out loud at what was being described to me. Months later I couldn’t put the books down. And I saw each movie in the theater. All eight of them.

Here are the five best parts of the special.

The introduction: Showing the journey of each of the stars arriving to the reunion is a wonderful start here. The invitations, the choreography, it all works.

The archive footage: Watching the old footage from the sets and press tours really transports us back to the 2000s era of these films. Its cut beautifully.

HBC: Much like she did in the films, Helena Bonham Carter jolts the special up a few levels. She’s laughing, shouting, and seems like she’s more excited to be there than anyone else. Her exchanges with Daniel Radcliffe and Gary Oldman are perfect.

In Loving Memory: This memorial segment is done about as good as you can do it. Goodness, I wish I followed movies this closely when Alan Rickman was doing his genius work for all of those years.

The last five minutes: Our conclusion to this special ties things up in a nice bow. And for a special like this one, that’s perfectly fine.

If you like what you’re reading here, please consider supporting the blog. It’s just me here and every little bit helps. Thank you!