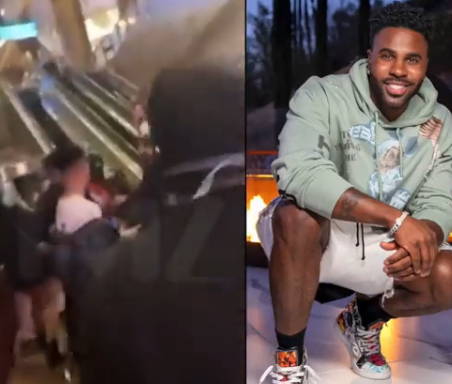 Well, I can say with a great amount of certainty that I did not expect to see pop singer, Jason Derulo, at the top of the trends today because of a brawl in a Las Vegas casino.

But that’s what we got when a couple of guys called him “Usher”.

Check out the video below.

The thing is that Derulo isn’t really known as a scrapper or even a rumble-tumble guy.

He was singing “Savage Love” during the pandemic on almost every station because no other music was coming out.

What caused him to snap in this video? We don’t know. It was Vegas north of 2 in the morning. There was probably some partying going on. That’s what everybody in Vegas does.

I can tell you that he doesn’t look like Usher. Those guys were trying to get on his nerves.

The sad part is that they succeeded. While they didn’t press charges, that doesn’t mean they might not sue later and get some money out of him.

But what does Jason do next?

Well apologize for the spectacle on social media, take some self inventory and make sure he’s personally well, and move on.

This is a speed bump and there is a lot of money to be made.

And he’s only 32. That’s nothing. Who knows what’s in store for him?

But this can’t happen again. Because then it becomes a trend. And trends signify there could be something wrong. His management should be aware of that.

Anyways, he’ll wake up tomorrow and his name will still be Jason Derulo, and it won’t be long before we hear him singing it again if the past is any indication.

Live. Learn. And move on.

2022-01-04
Previous Post: Grand Crew: Snappy pilot is worth a look with “This is Us” lead-in
Next Post: WWE NXT: So long Triple H era, you’re leaving when we need you most