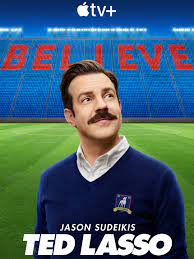 Ted Lasso: Comedian’s tweet offends some fans of the show

Ted Lasso was trending on Monday afternoon, leading fans to believe that a season three premiere date of the Emmy award winning show had been announced.

Instead, it was because of this tweet from comedian Megan Beth Koester.

And in plain text.

The remarks offended some fans of the show, and annoyed others checking to see if a third season had been announced only to feel like they had been insulted. So much that the show was trending in the top ten on Twitter with a new season of the show nowhere in sight.

I have zero opinion on Ted Lasso and am too cynical to make Disneyland my personaliry, but can we please stop using "childless" as some sort of insult? Cheers. https://t.co/k37XBTF42J

My fav part of the Ted Lasso discourse (which is exhausting, admittedly) is when a cool kid cynic starts out like “God, I bet this show is infantilizing treacle, guess I’ll watch just to mock!” and by the end of season one they’re like “why am I crying at a man throwing darts?” pic.twitter.com/5b0ihFRdTl

You're the kind of person who would benefit most from watching TED LASSO. https://t.co/pWRbuYTxBh

Married with 4 kids and Ted Lasso is the best thing to hit any entertainment screen since the pandemic started.

“I’ve never seen an episode of Ted Lasso.” Should have ended your sentence there.

if your statement starts with ‘i’ve never seen an episode of ted lasso but’ your opinion means absolutely nothing https://t.co/JIFhMjfQKr

you should watch ted lasso, you’ll be less miserable and judgmental https://t.co/MHNpd2UT3U

Why is it so hard for some people to basically just say, “This thing isn’t for me”?

(Never seen Ted Lasso, but this kind of attention-seeking, put-out-in-the-open-high-school-gossipy-tweet-that-gets-amplified-every-single-time is tiresome) pic.twitter.com/IEjeDxbVas

People like this are why fans of Ted Lasso love Ted Lasso. https://t.co/fv7qePLFpR

This is a very true assessment of Ted Lasso fans if by “childless adult whose entire personality is predicated on their love of Disneyland” you mean people relating to a character who tries desperately to maintain a façade of happiness while struggling with mental health issues. https://t.co/F9RIPFlPfE

Ted Lasso is a dad https://t.co/89SOJUWTgM

This Dad of 5 children was introduced to Ted Lasso by my Sister with 4 children and I love the show's positive, never-say-die, self acceptance vibe.

But that's because I bothered to watch the show, and I'm not a miserable Debbie Downer.

Ted Lasso looks like a silly show from the outside, but tackles issues of anxiety, depression, and public discourse about mental illness with enormous depth. It also has amazing women characters that bond and support each other fabulously. pic.twitter.com/MUEk7l1Kj4

Koester had her defenders. Many encouraging Twitter to not take the remarks so seriously.

Ironically, if you’re familiar with the show, Coach Lasso himself would probably forgive the words and move on. Season 2 dealt with serious mental health issues experienced by the beloved character played by Jason Sudeikis.

There has been no season 3 premiere date announced from Apple TV, but producers will no doubt take the free and positive publicity here in the offseason and move on.