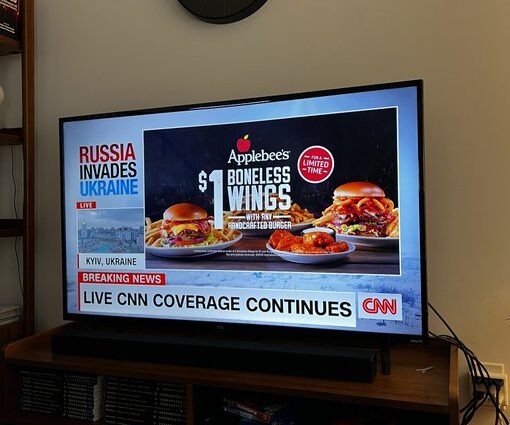 As the world watches the terrible events unfolding in the Ukraine, audiences are very sensitive to what they’re absorbing minute to minute on television.

CNN discovered that on Thursday when they started trending for the wrong reasons on social media.

Several social media users pulled a toss to commercial that featured sirens from Kyiv as the city braces for the worse one second, and then a joyous Applebees commercial the next.

The ad features the song “Chicken Fried” by the Zac Brown Band, as well as dancing cowboys and beer.

While television production seldom figures in what the commercials bookending their content will consist of, it resulted in an experience that looked obilivious to what was taking place with the Russian invasion.

You can look at some of the tweets below…

We’re living in an episode of South Park.

Applebees couldn’t get a Super Bowl commercial, so they took the WW3 CNN slot. Savage. https://t.co/3PWl7lW8Eu

This missile attack is brought to you by Applebees!!

Russia Invades Ukraine brought to you by Applebees!pic.twitter.com/buD9oJGej6

Applebees said they gone get these lunch specials off https://t.co/EohPmNIy4I

It’s so fucking awkward that CNN will cut from an interview with a Ukrainian family that has had their home bombed and lost everything to a commercial with upbeat music for fucking Applebees so quickly.

This was just a tough transition for CNN and Applebees here. Can’t say the Zac Brown Band loved this one pic.twitter.com/ZFUXFsr5Es

The nuclear apocalypse is brought to you by Applebees https://t.co/Pi90xMVHew

Y’all remember on Talledega Nights when there was a crash and they said it was going to be a long crash and so they went to an Applebees commercial? How did that become real life? pic.twitter.com/K9BfN49Qr8

Applebees: Lets take some ad space on CNN. What could go wrong?

We now interrupt the war report for a pressing applebees commercial https://t.co/3nDkHQKusY

This invasion is brought to you by Applebees
pic.twitter.com/HR9s1r71It

Applebees is the official sponsor of the Russian Invasion of Ukraine Halftime Show pic.twitter.com/3Xi8ZXe7Oy

None of the other networks have changed their commercials with both FOX and MSNBC both running familiar ads during the crisis. CNN does have correspondents on the ground in Ukraine and in Russia reporting up to the minute developments.

Applebees had experienced over 14,000 mentions on Twitter for the placement, more than any other commercial this year that wasn’t aired on Super Bowl Sunday.

2022-02-24
Previous Post: Euphoria: Would they kill Fez? Absolutely possible he could die
Next Post: Trending: WWE parting of ways with Cesaro first topic to replace Ukraine invasion on top of trends