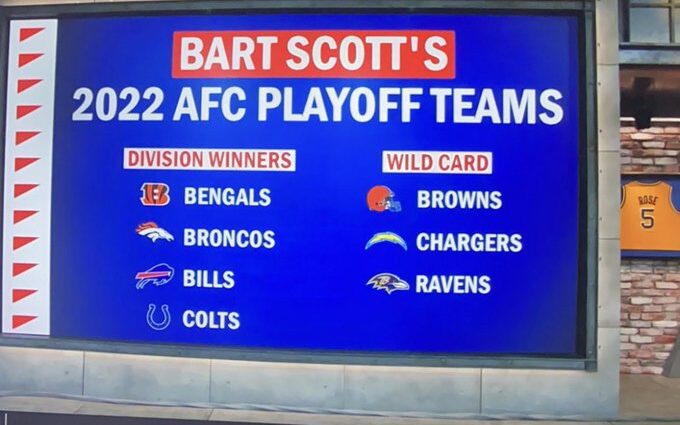 ESPN: Fans jump all over Bart Scott for leaving Chiefs off of AFC Top 5 Teams

ESPN loves analysts that will provide daily solid takes, but aren’t afraid to take risks from time to time to stir things up. A good example is Stephen A. Smith. Some others are Kendrick Perkins and Dan Orlovsky.

Recently, it was Bart Scott, and boy did he take a risk on Get Up while ranking the best teams in the AFC.

Notice something missing here? That’s right. It’s the Kansas City Chiefs, who have been to three straight AFC Championships, two out of the last three Super Bowls, and won a ring in 2020.

Needless to say social media pulled no punches on Scott. They roasted him so bad he was trending in the top 20 on Twitter on Tuesday morning. Let’s have a look.

Bart Scott is an idiot, Baker has a strong arm. That’s one part of his game that’s never been a flaw https://t.co/7QZnWI2kU6

Bart Scott has been smoking something. https://t.co/qtFPbSUQUA

Bart Scott just ranked the Browns ahead of the Ravens, Chiefs, Raiders in the AFC😂😂😂😂😂😂😂😂😂😂😂😂😂😂dude still salty over Hollywood cooking his ass lmao

Bart Scott didn’t even have the chiefs as a playoff team. They very obviously don’t drug test at espn https://t.co/leTxfwIVRL

Bart Scott really out here trying to die on the hill that the chiefs won’t make the playoffs in the 2022 season😵‍💫 #Mahomes #ChiefsKingdom #KansasCityChiefs pic.twitter.com/OaWjmSjYKr

Bart Scott would go in on Jesus Christ, if he was QB for the Browns. He hates everyone involved in the organization. Hardly the voice of reason.

I swear Bart Scott has the WORST takes. Thank you @diannaESPN for speaking sense! #TitanUp

Bart Scott is a terrible analyst

Someone get bart scott out of ESPN pic.twitter.com/lpevyrad53

LMAO! Bart Scott said Baker Mayfield is the 33rd best QB in the league 😂😂 and then he added “I’m saying that respectfully.” 😂😂😂 wicked.

What do you think? Is Bart Scott wrong? Are the Chiefs a top five AFC team? Would you want Baker Mayfield leading your NFL team. Let me know in the comments.