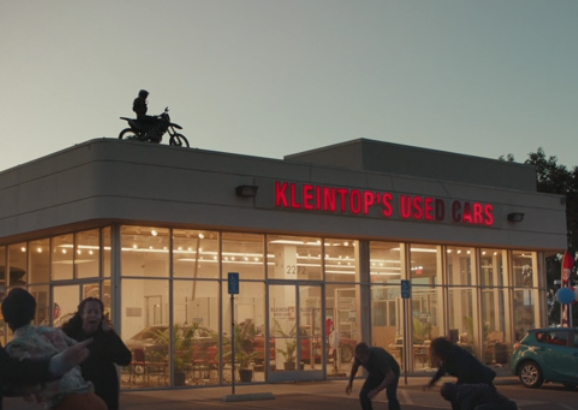 Barry: A scene appreciation of the “Taylor chase” from “710N”

Last week’s Barry was first class television. Probably one of the best episodes of modern television that we’ve seen. This is part 1 of 4 of a scene appreciation series I’m doing on “710N”

And we’re starting with that epic car chase. Let’s go.

“You’re my buddy”: This was top tier action television with a Barry delivery. We got Bill Hader humming and trying to keep cool in the madness. The motorcycle gang (the worst group of hitmen on TV) botched the job from the beginning, stopping at a red light and shouting in front of Barry just to make sure they were trying to kill the right guy. Unbelievable.

The rearview mirror shot and Grand Theft Auto: Everyone who had their eyes on Barry’s rear view mirror let out a “Holy $&!T” when the dude got hit on that motorcycle. Just brilliant direction by Hader there. Then there was the entire rear perspective that emulated Grand Theft Auto. Just Awesome.

Those guys are playing too much “Call of Duty”: “Handoff!!!” Dude for real tried to hand off a machine gun to his buddy on a motorcycle and it went exactly as it should have. The dude slapped the gun, it fell and he crashed. Having the gun shoot a couple of rounds before falling to the ground was just beautiful.

That gorgeous rooftop shot: The chase concludes with a gorgeous sunset shot of the motorcycle killer on the rooftop of a car dealership. We only see silhouettes and shadows. And then there is the whole weird dialog with the salesman, who continues selling until everyone realizes their life is in danger. Its both a beautiful and disturbing way to end the sequence.

The entire scene was just terrific.

Vote for your favorite scene from Barry’s “710N” below..

What was your favorite part of that last epic episode of #Barry? #BarryHBO

And if you appreciate my appreciation of “Barry” and the 710N episode please consider helping the blog. Thank you!