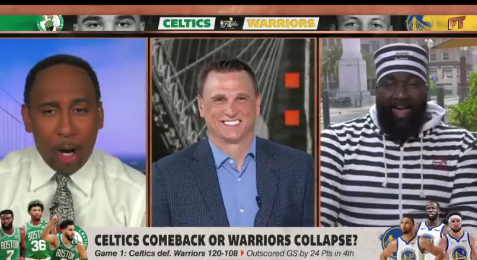 Trending: The internet can’t get enough of Kendrick Perkins and his outfit on First Take this morning

The internet went nuts this morning when they saw how Perkins was dressed on First Take. And it’s hard to not see why. Perkins was wearing a black and white horizontal striped outfit that resembled the Hamburglar.

There is really not much more to say about this. Let’s go to the tweets…

What does @KendrickPerkins have on?!

Kendrick Perkins is on ESPN dressed like an old timey villain pic.twitter.com/s0F4eXYH5B

Kendrick Perkins dressed like he got a ball and chain wrapped around his ankle pic.twitter.com/avmxNUMVWI

Why is kendrick perkins dressed like he escaped an early 1900s chain gang? pic.twitter.com/vSJnAGmsEJ

Kendrick Perkins is about to pilfer a big stack of burgers. https://t.co/nBdOFXMuRH

Kendrick Perkins and friends being sent into the Nottingham jailhouse. pic.twitter.com/h0cHsO5ynY

What did you think of the outfit Kendrick Perkins was wearing? Fair or foul?

What about his analogy that the Boston Celtics had the Golden State Warriors in handcuffs during game 1 of the NBA Finals last night? Was that accurate?

Also, if you enjoyed this post. Please help me out below. Even a dollar helps. Thank you!

2022-06-03
Previous Post: Study being used to kill rent help for Orlando residents is a “Book report of excuses”
Next Post: Obi-Wan Kenobi: Here is why some fans aren’t warming up to the return of the Jedi