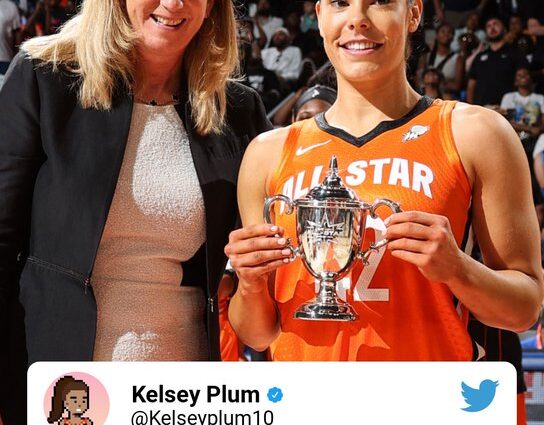 Hey! You can have a super comment read here! Just leave a tip below and comment as usual and you can have your words read before mine!

The WNBA All Star game was a delightful showcase of basketball talent held over the weekend as Team Wilson defeated Team Stewart 134-112.

But social media couldn’t help but notice how small the MVP trophy for the game was. It was abnormally small. And Kelsey Plum, who earned the honor with a 30 point bow, had the fans on social media rally behind her in what was another sign of inequality of genders between the sports.

And if you were thinking the same thing, you weren’t alone…

Shout out to Kelsey plum , she is dope asf but WTF IS THAT TROPHY MAN☠️☠️ https://t.co/XN05wR69Gl

1. Kelsey Plum can flat out.
2. That trophy looks like it came from the dollar store. https://t.co/mUz3Rw0N7L

Congrats to Kelsey Plum but that trophy is disrespectful! Do better @WNBA https://t.co/vjZIyurRLJ

I would give Kelsey Plum a bigger ring than that trophy https://t.co/mH0nqOtIGm

with a straight face, they gave this little trophy to Kelsey Plum, who had the highest scoring ASG debut in wnba history!!!! pic.twitter.com/j6UiJpMYy2

Mannn shoutout to Kelsey Plum but they couldn’t get a better trophy?! https://t.co/ZmT6gRT0Vb

Idk how she feels about it personally but that little ass trophy Kelsey plum got today was disrespectful as hell. that league has to do better #WNBAAllStar #WNBATwitter

The WNBA could have gone to Amazon and bought a better and bigger trophy pic.twitter.com/OC6omZvB1h

Now @WNBA needs to make an actual trophy that’s worth holding over their head with pride! #NoTeaCupTrophiesPlease https://t.co/zLsfnTZ9mW

Secondly this little mini tea kettle trophy is not the business!

You mean to tell me NO ONE could get 💸 together to get the @WNBA #WNBAAllStar MVP winner a decent @$$ trophy Y'all should be a mFn ASHAMED handing @Kelseyplum10 that dang "My American Girl" @$$ trophy Ya'll just be insulting these women & wonder why value isn't seen in WNBA Smh pic.twitter.com/oOGwOMn79Y

Nah they disrespected Kelsey Plum with that trophy dawg. Shit look like a souvenir from a gift shop. https://t.co/WZ5oGY9vwf

I just looked at Kelsey Plum’s trophy, and got mad all over again. It’s like the WNBA doesn’t even support the WNBA.

They have GOT to make a better WNBA Allstar MVP trophy. That thing is terrible! Congratulations to @Kelseyplum10 tho! 🔥🔥🔥

And as you can see, Plum dedicated her MVP trophy to fellow star, Britney Griner, who remains detained in Russia for unintentionally bringing cannabis into the territory. Officials in Washington are in the process of trying to get her free.

What did you think of the Kelsey Plum trophy? Should the WNBA make a bigger investment in their hardware.

And if you would like to make an investment in a blog, please leave a tip below. Even a dollar helps.

2022-07-11
Previous Post: Thor Love and Thunder: Fans rank phase 4 movies at halfway point
Next Post: The Bachelorette: Happy endings for both Rachel and Gabby might be asking too much