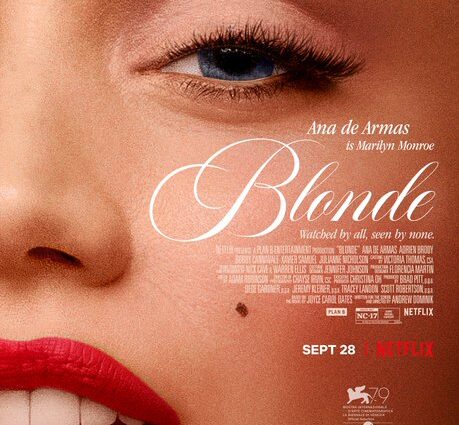 The new trailer for “Blonde” drops today, which is supposed to be a fictional portrayal of Marilyn Monroe, who is played by Ana de Armas (Knives Out) this time around.

Not everyone is happy with the rating. Others aren’t happy with the material. And yet another group seems displeased with unearthing the legacy of Marilyn Monroe in a light that isn’t necessarily real.

Let’s go to the tweets.

de Armas looks incredible as Marilyn Monroe, but knowing that the film is based on a fictional book and is rated NC-17 because it includes a gruesome rape scene really doesn't make me want to see it.

Even in death, Norma Jean can't escape men who would exploit her. It sucks. https://t.co/B1Ld8rRNqj

Insane thread – we’re not critiquing Blonde because “rape isn’t supposed to be in art.” We’re critiquing it because Marilyn Monroe has no say on whether or not she should be portrayed being raped in a film. pic.twitter.com/lYsc7jIt5Q

“marilyn monroe only exists on the screen.” hurm. i have thoughts already but i’m very curious how this film is going to turn out and if it just exploits marilyn or shows care towards her/her acting/her tangled legacy. https://t.co/lLWwJSEnBc

pretty funny to me how folks here were crying about Kim Kardashian destroying the historic Marilyn Monroe dress, and now turn 180° to support a film which is by all accounts, an adaptation of a disaster fanfiction of her life. leave her alone and let her rest in peace!

and the art in question is a fictionalized account of marilyn monroe’s life that subjects her to heinous shit pic.twitter.com/m9lubSqbmu

reminder than blonde is NOT a marilyn monroe biopic, it's based on a novel and it wouldn't take an english literature major to know what a novel is pic.twitter.com/H5blyXssDj

these marilyn monroe movies are all the same, they keep potraying her as a victim and ignoring the fact that she was one of the greatest artist of her time, she has influenced generations after her https://t.co/q0CAm7yOwB

she looks the part but let’s not forget that this is not a biopic, it’s an adaptation of a book that is hugely disrespectful to marilyn and even creates a fictional rape scene. this movie is nothing but disrespect to the legacy of marilyn monroe https://t.co/xyGlWB7amS pic.twitter.com/h1WqO6Rrgo

reminder to maybe not watch this movie cause its based on a problematic book abput marilyn monroe https://t.co/98hQ13G02V

What do you think? Will you be watching “Blonde”?

Do you think Hollywood should move on from celebrity biopics? Let me know in the comments below.

Also, if you enjoyed this content. Please leave a tip. Any small amount is a great help!

2022-07-28
Previous Post: AEW: That Anna Jay heel turn needs a little fine tuning
Next Post: PACT Act betrayal is exactly what makes veterans give up on everything