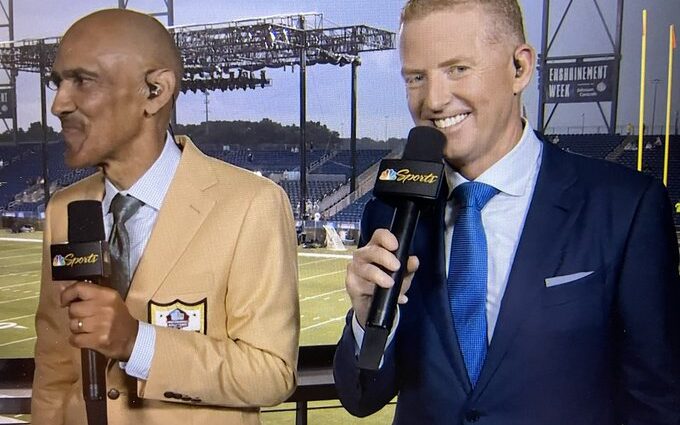 Hey! If you enjoy this post, please leave a tip. Even a dollar helps. Thank you!

“NFL Football is back! Hooray!”

“With Jason Garrett on the desk! Awwww!”

And so goes the Thursday night NFL TV audience that got the former longtime Dallas Cowboys coach trending on prime time, during the Hall of Fame Game featuring the Jacksonville Jaguars against the Las Vegas Raiders.

They got him trending all the way to #2 on Twitter, only behind a controversial video from former Vice President Dick Cheney with a partially faux negative sentiment (meaning social media users were saying negative things but they were mostly jokes) and its also worth noting that social media is tough on almost every broadcaster at one point or another.

Lets go to the reactions!

Turn on football for the first time in 170 days and Jason Garrett is on my screen 🤮 pic.twitter.com/XSIOHdzUhF

Jason Garrett has been standing like this for about 7 hours now #NFLTwitter #NFL pic.twitter.com/8feLD0HHgR

Just turned on the Raiders-Jags game. There is a weather delay and Jason Garrett is giving analysis.

Someone tell Jason Garrett this story is way too long for live TV.

You’re telling me we’re starting the season with a rain delay and Jason Garrett on the mic?

Jason Garrett has been in the booth for 20 minutes and has already annoyed the holy living shit out of me.

Jason Garrett holds his microphone so high, the NFL is planning on suspending him for entire season pic.twitter.com/EsKMbmQcGC

Why the HELL is Jason Garrett on my screen

Just like Jason Garrett ran the same plays with the Giants last season. He repeats the same Hall of Fame story about Aikman on the NBC broadcast.

just turned on nbc to fucking jason garrett, way to ruin it.

Why is Jason Garrett yelling

Can someone tell Jason Garrett he doesn’t have to yell at us?

I thought Jason Garrett the coach was bad.

Jason Garrett the analyst is so much worse.

THIS IS ME TYPING LIKE JASON GARRETT IS TALKING TONIGHT

And if it’s NBC social media, viewers will find a way to diss “Meet The Press” host Chuck Todd.

Then again, I shouldn’t be surprised when NBC is the same network who thinks Chuck Todd is good at his job.

seeing Jason Garrett on football night in America infuriates me

Are you a Jason Garrett fan?

If not Garrett, who would you rather have on the desk?

Did you watch the HOF game? Or are you waiting for the regular season?

And if you enjoyed this content, please leave a tip below. It’s just me here and every little bit helps.