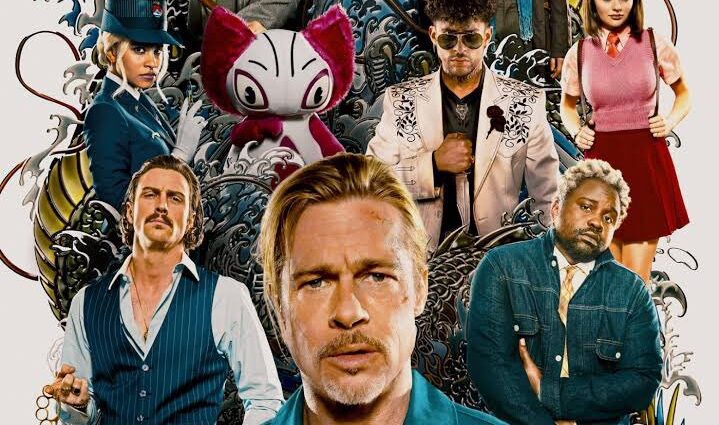 Here are some early reactions. Most of them are pretty good which is good for the film which is only scoring in the 50s on Rotten Tomatoes.

Let’s go to the reax!

Holy crap, #BulletTrainMovie was a blast. A Rube Goldberg-esque mystery machine with the style of an old-school Guy Ritchie movie and directed by one of the guys who made John Wick. Plus everyone is hella famous and having so much fun with their public personas.

Some questionable cockney accents aside, this movie is WILD and brings a crazy amount of energy!

The tone is over the top for sure, but not once was it boring and the story kept surprising. #BulletTrain pic.twitter.com/xIgvxjPiO1

Saw #BulletTrainMovie today and absolutely loved it!
The cast were all brilliant with each of their distinct characters, the action was superb, the way everything (even small lines) comes together is spectacular and the film just has so much style to it.
Highly recommended pic.twitter.com/kofsiBh7EZ

#BulletTrainMovie is what happens if you take stoner True Romance Brad Pitt and turn him into an assassin.

An absolute riot of a movie, loved it! pic.twitter.com/zKdoD2Trkl

#BulletTrainMovie is the most chaotic, bloody, ridiculous, action-packed movie of the year! #DavidLeitch goes full Tarantino & crafts a Mission Impossible meets Kill Bill story that will have fans laughing & on the edge of their seat throughout. #BadBunny did good in his role. pic.twitter.com/GXO9c5oHMX

#BulletTrainMovie does a remarkable job of looking fun without ever actually being any fun.

I really enjoyed #BulletTrainMovie. Amazing cast, lots of action, mayhem, and fun throughout. See it on the biggest screen that you can! #BulletTrain pic.twitter.com/ZUG12DaI0l

#BulletTrainMovie Bullet Train is well worth the watch. Don't waste your life watching that awful film The Gray Man #TheGrayMan . Brian Tyree Henry's Lemon is the tarty goodness of this Film 😍Brad ain't Bad, as is Peitro 😍 pic.twitter.com/OYDpQnyYgq

“There is no bad film with Brad Pitt in it!”#BulletTrain is what happens when you put Deadpool 1&2 in a jar, add John wick to it before garnishing it with Thor: Ragnarok and Hangover trilogy — served by the OG Brad Pitt himself.#BulletTrainMovie #BulletTrainWithMoviesNow pic.twitter.com/1XqmP0snxT

Just got out of seeing .@BulletTrain and I loved. Lots of fun , good popcorn flick. Go see it and have a good time, form your own opinion. #BulletTrainMovie

#BulletTrainMovie was excellent. Slow start but got increasingly better over the course of the film. Brad Pitt is America.

I enjoyed #BulletTrainMovie immensely! It was actually way more violent than I usually choose to watch and I still had a great time.

Were you one of the early viewers of Bullet Train?

Do you plan on seeing it this weekend?

Let me know in the comments below!

And if you enjoyed this content, please leave me a tip below! Thank you!