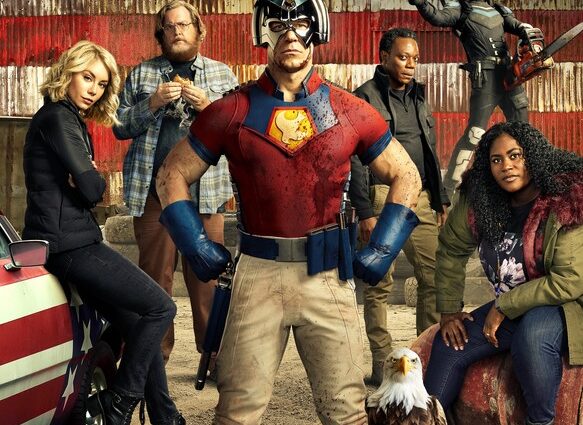 The newest superhero show on TV insists on having your attention throughout its running time.

And after a incredibly contagious opening credits scene, it will probably get it. Seriously, you might want to watch it a second time. It’s good stuff.

John Cena is back as the title character, who after the events of “The Suicide Squad” is still stuck working for the government and trying to save the world. There are some other tag alongs from the film and frequent mentions during the shows multi episode premiere.

James Gunn, who knows his way fine around the superhero stuff gives us a fast paced show, and the supporting cast anchored by Jennifer Holland and Danielle Brooks plugs right into the ridiculousness of the entire story. They just throw some many silly and likeable things at you (like a pet bald eagle) that you can’t help but enjoy the ride. Even the hair band 80s soundtrack is a blast. And if the 80s isn’t your thing, how about rock reimaginings of “Drag me down” or “Pumped up kicks”? The music is too much fun.

There are some concerns here, although not immediate to see during the three episode premiere. That concern being how long they could possibly keep this going? The Novocaine will wear off eventually.

But let’s focus on the “now”. And “now” is all good. This is a playground for everyone involved, and if they can keep this formula going then “Peacemaker” is destined to be one of the most enjoyable TV experiences out there. And even though the genre is packed, you’ll be able to find room for this one. If not, make room.

If you like what you’re reading, please continue helping the blog. It’s just me here and every little bit helps. Thank you!

2022-01-13
Previous Post: Eternals, the worst MCU film, is now available on Disney Plus
Next Post: Peacemaker: The internet can’t stop talking about that intro