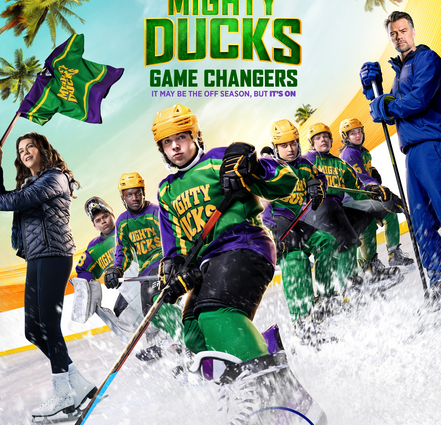 The Mighty Ducks Game Changers: “A little hooky from Hockey”

It’s time for the finals on Mighty Ducks: Game Changers where our favorite underdogs have made it to the conclusion of the EPIC tournament against Team Dominate. The winner will go to the summer showcase to play against the Canadian youth team in front of scouts.

We began with a pre finals banquet. And a buffet fight. Which was predictable but still made me smile. Sophie would bring everyone back together in another scene that we also saw coming, but works because its the Ducks.

Then we got more Rich Eisen (who will never get old here). But the kids ditched the game to have a summer party. Alex joined them. Coach Cole demanded they come back. Marnie rebelled. Rich Eisen bolted. Coach ultimately showed up and joined the party himself.

Then Cole decided to clear things up with his son by tackling how they both missed their wife and mom respectively.

But they still had to play the showcase. The teams decided they wanted to merge. Then they decided to sing “Landslide” by Fleetwood Mac. Which was terribly out of place but still fun sing along TV.

We close on Chase taking some shots on goal and he still had the “yips”…. Then he didn’t. He started hitting everything. And the Ducks were there to cheer him.

Then the Canadian team arrived. Their coach? Coach T from the Corporate Ducks team from last season. Great cliffhanger.

It looks like next week could be our finale. I’m ready for it. See you then!

2022-11-23
Previous Post: What I’m grateful for, even though I’m not in Orlando for Thanksgiving
Next Post: The Real Love Boat: “This isn’t the real friendship boat”