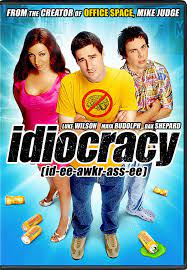 Don’t Look Up: You shouldn’t dare compare it to “Idiocracy”

Listen, I can appreciate what was trying to be done. And the A-List cast really gave it their all in the ridiculous “Don’t Look Up” meteor film that premeired on Netflix this weekend (my review HERE).

But don’t you dare stick in the same room as “Idiocracy”, the 2006 futuristic comedy starring Luke Wilson, Maya Rudolph, and Terry Crews.

This comparison started popping up by the fanboy culture that wants “Don’t Look Up” to be better than it really is.

Idiocracy was something special for it’s time. It wasn’t a blockbuster. It had zero acting Oscars in it’s resume, while “Look up” has 6 in the first couple of actors listed in the credits.

It also wasn’t really out to prove a message. It’s first objective was to be funny. And it was. We have wrapped our culture into what Idocracy was as a film. “Don’t Look Up” is a movie that has wrapped itself trying to be like us. There was no fortune telling aspect involved like Idiocracy.

If you like a movie, let it be strong on it’s own strength. You don’t have to compare to others. Especially, in this case where the movies are so different, that you’ll be steering your audience in the wrong direction with the endorsement.

There is an excellent chance that if you recommend “Don’t Look Up” with the expectations of an Idiocracy, your audience is going to be pretty ticked off.