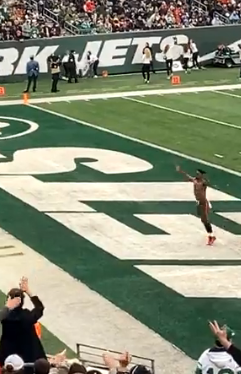 Many of us saw something we’d never seen in the NFL this afternoon. Sunday, January 2nd, 2022.

We saw a grown man. Formerly, one of the best in his position. Undress on the sidelines of a regular season game. Walk out on to the field and start doing jumping jacks in the end zone.

That’s what we got with Antonio Brown after he was benched by head coach, Bruce Arians, in the Tampa Bay Buccaneers 28-24 victory over the New York Jets.

Sadly, this is on Tom Brady. He’s the reason Antonio Brown is still in this league.

But even the GOAT had couldn’t handle this level of mental health challenges.

And I want to emphasize that Antonio Brown, may indeed be facing those kind of issues.

However, the NFL is a win first league. And Brown’s distractions almost costed the Bucs a game today.

While Brady was on the field and didn’t even hear about it until later (Which is kind of weird, dude was half naked doing calisthenics in the end zone), the challenges haven’t outweighed the benefits with Brown here.

There was the fake vaccination card. In addition to his legendary antics before he arrived in Tampa Bay, including New England, where he worked with Brady as well.

Brady even asked for us to be compassionate towards Brown after the game.

But that’s a big ask this time. The best thing for Brown to do is to seek some help.

Tom Brady is an NFL quarterback. Not a psychiatrist. Not a babysitter. Brown took advantage of him.

And Tampa Bay should move on from him, and that includes number 12.

2022-01-02
Previous Post: WWE: Can we have the old Becky Lynch back???
Next Post: Dexter New Blood: Trailer for the finale says a lot and it’s not good