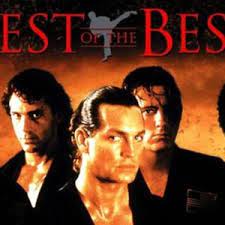 Cobra Kai: “The Best of The Best” callback and Cynthia Rothrock (mild spoilers)

Warning! The following includes some mild spoilers regarding the fourth season of Cobra Kai

Oona O’Brien plays Devon Lee on the fourth season of Cobra Kai, as a debate champion turned female contender for Eagle Fang Karate in the All Valley Tournament. She’s recruited by Johnny Lawrence after the rules are expanded for a Women’s bracket that can determine the outcome of the tournament, and the wager with Cobra Kai.

But Lee’s memorable moment in the eyes of most 90s kids (besides that debate scene) will be when she wins over Lawrence and every other “action” dad on Netflix by mentioning “The Best of The Best”.

The Best of The Best was one of the best karate films of the 80s. It starred Eric Roberts, Chris Penn, and the wonderful James Earl Jones, as an Olympic karate team that must overcome their issues as individuals to form a team and challenge the unbeatable Korean karate team.

And yes, there is a scene where one of our protagonists has to fight with one arm.

It’s actually a pretty good film for what it is. An 80s karate movie. And it doesn’t surprise me at all that Johnny Lawrence enjoys it.

And there is the other reference to Cynthia Rothrock that you might already be familiar with because of the other blogs, but I’ll briefly cover anyways.

Rothrock was an early 90s B-movie action queen that starred in many films, including the “China O’Brien” franchise. If you had Cinemax or video membership to a Hollywood Video, then I have no doubt that you’ve seen her films before.

Anyways, this was another pop culture call back in Cobra Kai making up a small part of what was arguably it’s best season yet.

2022-01-05
Previous Post: WWE NXT: So long Triple H era, you’re leaving when we need you most
Next Post: Book of Boba Fett: Don’t stick a lizard up your nose (review and spoilers!!!)