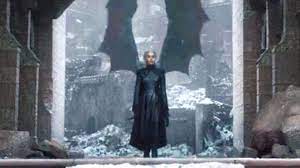 As we continue searching through the social media wreckage that was the Dexter: New Blood finale, we begin exploring how bad it actually was in comparison to other unpopular finales of beloved cable drama programs.

In two small Twitter polls that received about 25 votes each, The Dexter: New Blood finale defeated other shows that had controversial endings like “The Sopranos” and “Lost”.

One mark against our favorite killer of serial killers is that this series appears to have done it twice.

I wrote last night about how difficult the finale must have been to write (post HERE). Maybe there wasn’t a right answer for Dexter.

For Game of Thrones, show runners had some options that could have save them a lot of headaches. Instead, they over thought it, and produced a final season that many fans wish never existed.

Daenerys torching King’s Landing. Dexter killing Logan. They both went against type (even though writers did make it a possibility). And it was down hill for the fans all the way until the final credits.

We should let the wounds heal. I would bet that in six months, the anger might fade a bit and Game of Thrones might actually win this same poll.

But the fact that we’re even having this discussion about Dexter is a tragedy to begin with.

What do you think? Is the Dexter New Blood Finale as bad as the final stretch of Game of Thrones?

Check out my video on the subject below as well as some tweets from upset Dexter viewers.

The ending of #DexterNewBlood makes #Dexter's finale epic. They revived the series only to fuck up again. What's the difference between the arc Dexter got previously and now? Finale was Game of thrones level bad rush. pic.twitter.com/Ic2drSVOso

Dexter new blood finale is like game of thrones series finale and they did not even redeem the hot mess they wrote from the original finale. #DexterNewBlood pic.twitter.com/6Pumktku6L

What is it with great Shows like Game of thrones or Dexter, that they just can’t stick the landing? #DexterNewBloodFinale pic.twitter.com/0wUaEBjoGI

2022-01-10
Previous Post: Dexter New Blood Finale: How would you have ended it? (Spoilers!)
Next Post: The Power of the Dog: You’re not alone if you don’t like or understand the Golden Globes winner