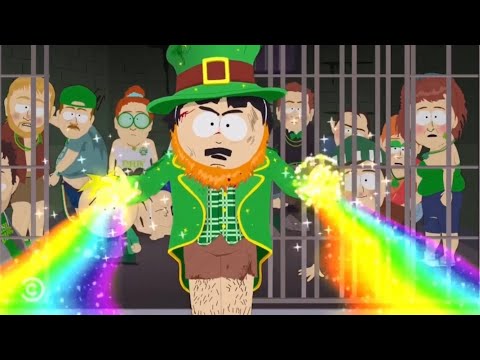 South Park was back this week, and they tackled St. Patrick’s Day this year. More specifically the “Cultural Appropriation” taking place on the holiday (their language, not mine). And even more specifically, Butters as a sexual predator, and Randy with super Leprechaun powers.

The problems started when Butters went to school and couldn’t help himself from pinching a girl who wasn’t visibly wearing green. So, the cops came down and locked him up. But then the public defender came in to interview him, and he tried to pinch her because she wasn’t wearing green. Then it was a cop. And he got tased for that.

On the other side, Tolkien’s family, which had previously opened up a weed farm across the street from Randy’s, stood up their own St. Patrick’s Day special of weed. Randy was upset that the holiday was being hijacked. And he also got arrested after attacking Mr. Tolkien.

Anyways, the boys had to breakout Butters and Randy, and when Randy smoked his St. Patrick’s Day special he got leprechaun powers that allowed to shoot rainbows and “coins of spite” at the cops.

He then went down to the party at Farty O’Cool’s and confronted Tolkien’s dad, who stole his weed. Then the real St. Patrick came down from the sky, started groping everyone and completely ruined his own holiday.

The show ended with Butters on community service for five years and St. Patrick’s Day getting cancelled.

South Park has been pretty good this season. You know I’ll be back next episode.