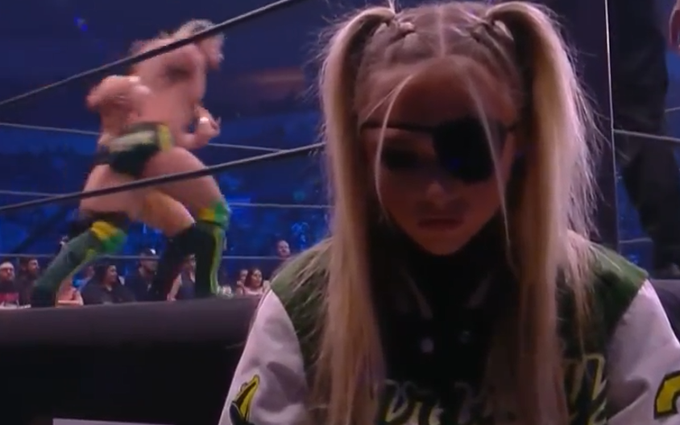 AEW Dynamite: Fans are still wondering what they’re going to do with Julia Hart

Listen, at the end of the day, this is probably a great thing for 20 year old AEW star, Julia Hart. Like I’ve said before, we’re invested.

But fans have been waiting for progression with her story for a couple of months now since she was sprayed in the face with mist from Malakai Black. Is she going to join the House of Black? Is it the Varsity Blondes that will be turning heel instead of her?

After tonight, when the Blondes lost to Jon Moxley and Bryan Danielson, all we got was Julia Hart sitting on the ring steps while William Regal cut a promo with the guys. She’s been doing this for a while now. She did pick up a singles win this week, but fans are still asking questions after tonight.

Let’s go to the tweets (where she was trending once again)..

So wanting and craving for Julia Hart to finally open the door to the House of Black and take her rightful place on her throne. Open…..the…..door…..Julia. #DarkQueen #HouseofBlack #AEWDynamite 🏠🖤☠️👀😈 pic.twitter.com/u5Wit6sLxh

I'm not sure where they're going with this but I'm here for it. She had me captivated by just sitting there doing nothing. #AEWDynamite #JuliaHart pic.twitter.com/pUdQ4exjCF

Live look at Julia Hart for no reason. pic.twitter.com/REVFxXA1OQ

Why the hell was Julia Hart just sitting on the steps during all of that ?

Julia Hart just sitting on the steps after Griff and Pillman got destroyed.🤔 #AEWDynamite

Julia Hart just sitting on the steps through the match and Moxley’s promo.

I AM READY FOR HER TURN!

What do you think? Are you ready for a Julia Hart heel turn? Do you think it will be the Blondes who go heel? And what about The House of Black?

Let me know in the comments.

2022-03-23
Previous Post: The Masked Singer: These guys might be running out of celebrities.
Next Post: AEW: Fans aren’t digging Sammy Guevara and Tay Conti bringing their romance to TV