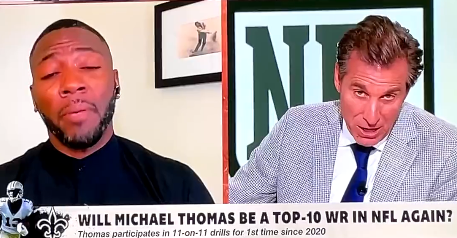 If you enjoy this content, please leave a tip below. Even a dollar helps.

ESPN viewers love when things get real on “First Take”.

And they were quite happy watching NFL analyst and Super Bowl Champion Ryan Clark, take on Chris “Mad Dog” Russo over a football debate regarding Heisman voting.

Things get ugly on “First Take” between Chris “Mad Dog” Russo and Ryan Clark over whether Cooper Kupp is a Hall of Famer/Heisman voting. pic.twitter.com/wKwfJB5TFX

Ryan Clark said this the last time you holla at me lol.

It got heated between Ryan Clark and Mad Dog Russo 😂😂 pic.twitter.com/JlNwIzvVN1

Mad Dog and Ryan Clark going at it on First Take and i’m loving this! a poor man’s Stephen A & Skip Bayless.

Ryan Clark hit em with the "who you yelling at?"

I definitely saw what Ryan Clark just did on TV. If WE don't have each other's back, we know THEY never will!

Russo is an idiot, they'll let anyone on tv. I'm glad Ryan Clark straightened his ass out!!! Cooper Kupp is Not a Hall of famer!!!

In case you were wondering about where Stephen A. Smith was.

Talk to your man Ryan Clark about respecting his elders and if he don’t wanna get yelled at to not go on a debate show … debates usually have yelling … https://t.co/cFL1Ip2xc1

Ryan Clark being real soft on first take this morning 😂😂😂

He a hoe. I come downstairs and see Ryan Clark on his ass🤣

Ryan Clark just shut down that loud mouth MD, that how you do it.

lol ryan clark bouta kill that man through the tv

Ryan Clark got me CRYING on First Take. That man told Mad Dog Russo “This is this last time imma tell to stop raising ya voice at me” 😭😭😭😭😭😭😭😭 Bruh was HEATED. First JJ Reddick and now Ryan Clark. Russo better chill man 😂😂😂😂😂 @Realrclark25

Ryan Clark and doggy goin at it on @FirstTake lol

This “maddog” character on @FirstTake take is a goofball. Just talking nonsense. Ryan Clark had to tell his ass to lower his voice when he talks to him 😂

Did Ryan Clark and Mad Dog lose their temper?

Who is actually right?

And if you enjoy this content, please leave a tip below. Even a dollar helps.