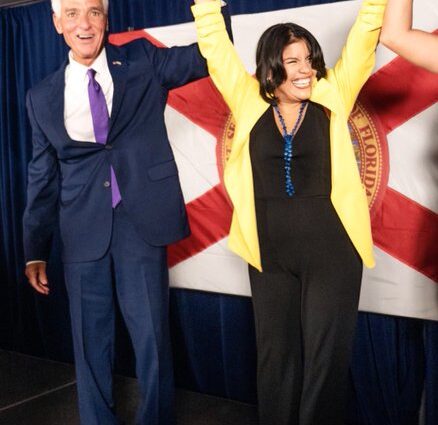 Hernadez-Mats told her story of being a part of a family from Honduras becoming successful here in Florida, and her background as a Miami-Dade schoolteacher.

She stumbled a few times and we heard a lot Obama 08 stuff but she “got it over the net” thanks to a good crowd (they should have saved this announcment for Monday, they barely spoke a word of it in Orlando).

But Charlie Crist will still have to do a majority of the policy lifting in this campaign. Almost all of it.

That shouldn’t be a problem. The dude, had the job for four years already and has been in politics forever. He’s still one of the best retail politicians I have ever seen.

But it also looks like he’ll have to do most of the attacking as well. Hernandez-Mats didn’t really sell the case against DeSantis effectively.

And that could be a problem, because two “happy warriors” on ticket isn’t the best combination. It’s almost like a football team that doesn’t have an offense.

In 2014, Charlie Crist didn’t attack Rick Scott enough. Every rally became a copy and paste ritual that gave the media nothing to talk about down the stretch. Meanwhile, Rick Scott kept pasting Charlie on his party switch and position flip-flops.

In 2018, Andrew Gillum and Chris King were happy warriors. You know what happened there.

What do you think a brawler like Ron Desantis, who is currently channeling the energy of Donald Trump, going to do?

This campaign had better have some surrogates throwing out some serious “smoke” or Ron will walk all over these guys.

If you enjoyed this content, please consider helping the blog. Thank you!

2022-08-28
Previous Post: Jerry Demings needs fair rent stabilization to die before campaigning for sales tax increase in OC
Next Post: AEW: The wrestling internet is all the sudden deciding to turn on Tony Kahn for no good reasons